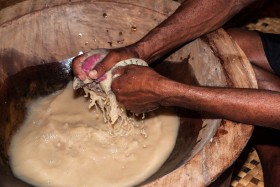 Fijian kava ceremony is one of the important activities in which people take part automatically while visiting any Fijian village. It is celebrated like a custom to present a gift of kava or yaqona root to the executive head of the village while visiting there.

History of kava in Fiji

Kava or kava-kava is a pepper plant usually available in western Pacific region. The name Kava is taken from Marquesan and Tongan languages whereas in various other languages it is known by various other names like yaqona in Fijian, ava in Samoan, sakau in Pahnpei and awa in Hawaiian. The drink extracted from the roots of kava plants is consumed all over Pacific region including Fiji, Vanuatu, Melanesia and Hawaii as a cultural drink due to its anesthetic and sedative qualities.

In Fiji, kava is drunk by both the genders as a traditional welcome drink at all the public and private occasions including socio-political events. While entering a Fijian village one must know about kava ceremony as the situation can be confusing otherwise. Even if you are not familiar with the kava culture of Fiji, you need not worry as Fijians can tell you patiently about the process. Things can be a bit easier if you know about Fijian kava ceremony before visiting Fiji. The facts and tips about this ceremony provided in this write-up can help you taking active part in such ceremonies during your next visit to a Fijian village.

While entering a Fijian village one must bring kava roots as a gift for the executive head of the village to participate in this ceremony. It can be bought from the local market. At this occasion, women should dress up moderately by wearing sulu and men should also be dressed up respectfully. While entering the house of executive head of the village all men and women should follow the eldest member of their group. After entering the house, all must sit down and remain in the seat throughout the ceremony. You should ask respectfully if you want to take pictures of the ceremony. The gift of kava roots is presented to the head of the village by the head or the eldest member of the group.

At the start of the ceremony of Fijian kava villagers grind the kava roots and strain the pulp in a large wooden bowl placed at the center of the room through a cloth bag. Then the kava is offered first to the head of the group and second to the village head but the village head drinks it prior to everyone else. Though kava is drunk by both the genders but men drink it before women.

During this ceremony you will be asked to opt from high tide or low tide i.e. full cup or half cup while serving you kava. When receiving the drink you should make a cup of your hands and clap once with a hollow sound and yell Bula before drinking the kava in a gulp. After drinking kava, you should say Mathe while clapping three times.

Thus, you can easily take part in Fijian kava ceremony if you know about its etiquettes beforehand.