Fijian Legends in the Ancient Times 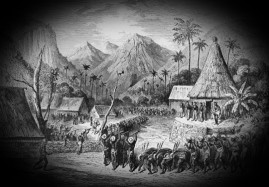 Fijians are inhabitants from the island in the Pacific Ocean known as the Republic of Fiji.This Island became independent in 1987 from the hands of the Great Britain which comprised of several ethnic groups originated from Fiji Island. In most cases they share cultural traits besides that they had a right to own resources, right to own their land and also the power of the island was their mandate as they repute the colonization from the Europeans. Different sources emerged about the legend of Fijian on how it comes into existence.

In the olden days, it was believed that the island had no snakes but as time went, it was noticed that their god existed known as Degei a snake god believed to be the creator of the Fijian people. The legend of this island illustrates that Degei lived alone as a result he knew Turukawa the hawk as the only creature in the whole island. The existence of the Fijians came into being through the stolen eggs from the hawk which eventually looked after and then hatched resulting to the first Fijians in the island.

Dukuwaqa the shark gods was considered the most brutal of all the gods existed in the island of which its responsibilities were to guard the ocean and reefs. Occasionally he changed into a cruel shark when battling with other gods in the island and thus rising victorious. Sources narrates that Dukuwaqa encountered Octopus guardian from another island known as Kadavu as a matter of fact, Octopus challenged Dukawaqa and emerged victorious as Dukawaqa solicited for mercy promising anything in return including never to hurt the people of Kadavu.

Fiji was a beautiful island as flowers was the national floral symbol which was referred the legend of Tagimoucia. This symbol was found in Lake Tagimoucia commonly known as the muddy mountain. The tradition in this case explains how the beautiful red and white flowers came into existence. The legend behind the beautiful flowers is all about the proposed marriage between the princess and the man she never loved since it was the commands from her father. Unfortunately, she ran through the forest until she collapsed along the lake as tears of despair turn into beautiful flowers.

This island experienced cannibalism, for instance, the Fijian chief Ratu Udre Udre who holds the Guinness World record title as the most prolific cannibalistic which is absolutely part of Fiji’s folklore. This cannibal in most instances was reportedly ate 872 and 999 people in the 19th century following that certainty that he would have become eternal after eating one thousand people. The mausoleum of Ratu Udre Udre still subsist and can be visited most frequently at Rakiraki, in north Viti Levu accompanied by 873 stones representing the persons he ate.

The legend of Fiji people understands very well the rites of passage in the sense that children take orders from older members of the family, in particular from their father. Several virtues are expected from the children including respect and strict obedience as the legend of Fiji illustrates. Discipline and punishment was the responsibility of the father, as mothers were considered generous with their children. Traditionally especially the culture of Fiji, mothers were expected to be virgins at the time of marriage. The act of premarital sexual relationship was condemned and was not allowed totally in the society. Diseases and death were regarded as evil spirits as it was attributed in the tradition of Fijian culture. Funeral ceremony was very elaborate and conducted according to the men of status. Importantly, related groups to the deceased would visit the village and pay tribute to the family members. Numerous events followed as strict rules and regulations were enforced after the death whereby they remained effect up to one hundred nights. Significantly, wives were strangled to escort their dead husbands into the spirit world believed that god Ruvuyalo would kill the spirit of any man who refuses to have his wife associating him though the practice is no longer followed.

Men from Fijian society were allowed to have more than one wife at a time. According to the Legend of the Fijian people, the more wives a man had implied the higher his social status. Chiefs created political alliances among various villages and clans due to the many wives they acquired. Most houses in traditional society of Fijian households were composed of extended families in the sense that, once the couples get married, they habitually live in the house of the groom’s father. Leadership of the extended families was under one senior male as a matter of fact divorce was accomplished by either the husband or the wife. The Fijian people had family structure which was led by a strong figure whose authority was not questioned in any manner. Powers were granted in every family according to age and gender. For instance, any food that is not eaten by the senior man automatically cannot be eaten by anyone else as the Fijian culture demonstrates. The social responsibility of the women in the family was based on that of her husband, unless her family is of higher status.

European missionaries since their arrival in Fiji, they introduced western education to increase the population to acquire knowledge. Several mission schools were built by Methodist and catholic missionaries to enhance the level of education depending on the level of faith in the Fijian people. Rural villages often shared a common school based on communal principles as high school education was valued more and thus was obtained in towns and cities. In addition, the existence of the Europeans in the area resulted to economic changes in Fiji as well as the maturation of its political systems emerged. Some schools taught pupils about the existence of the pigs in the island of Fiji to maintain the culture of the Fijian people for many generations to come.

In conclusion, Fijian Legends and Myths form a beautiful culture in the Fijian mythical tropical paradise. The island experiences plenty of richness for the lifestyle of the Fiji people.